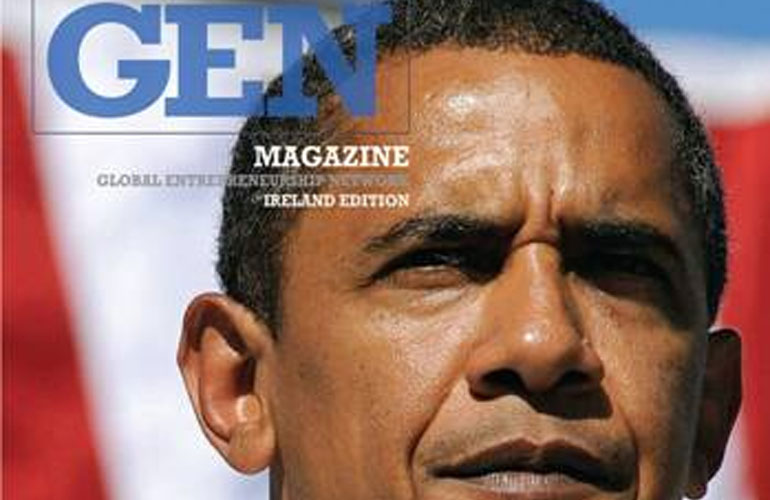 Today, Friday December  4th, An Taoiseach, Enda Kenny welcomes and supports GEN Ireland, a new and independent open platform for entrepreneurship in Ireland and internationally that is set to unlock the potential of the next generation of start-ups as the job creators of our future.  “I am delighted to welcome the arrival of GEN, the Global Entrepreneurship Network, supported by President Obam
a and Ewing M. Kauffman Foundation.  GEN Ireland will play an important role in a range of initiatives for start-ups including developing Ireland’s new foundation for entrepreneurship (INFE).  This will help to seal Ireland’s reputation as a global hub for start-ups and a great location to do business, as part of our determined efforts to keep the recovery going and continue strong job creation.”

A further boost comes for the initiative as it unveils itself in a special 24 page publication, featuring President Obama as its cover and Foreword, putting Ireland’s entrepreneurial culture and ecosystem to the forefront highlighting,  research, innovation and education. The publication is inserted to the Irish Times as part of a national awareness campaign. Both leaders, President Obama and Taoiseach Enda Kenny, converge on the GEN Ireland platform and share in a sentiment about entrepreneurial Ireland and its value. “This is a nation that inspired the entire world..Ireland’s youth are among the best educated and most entrepreneurial in the world,” President Barack Obama.

“This is an exciting time for all startups and people in Ireland who think of starting a business. The GEN Ireland initiative opens Ireland up to  a new global platform of 160 countries and 25 thousand partners, significant events, competitions, programmes, policy and research, forums and resources as part of one global entrepreneurship ecosystem, that is inclusive. GEN Ireland provides a platform for knowledge sharing in an open environment so everyone benefits. We are further encouraged by the support of Kauffman Foundation who are the key drivers of GEN Global. As part of this, Ireland can benefit enormously through the wealth of entrepreneurship knowledge we bring and share by introducing GEN and Kauffman Foundation to Ireland on a broad scale,” explains Maree Helena, Co-Founder, GEN Ireland.

“Ireland’s entrepreneurial ecosystem  will get a further boost from the rollout of GEN Ireland, with an array of research, policy, and startup initiatives and programs that will bring together all the various entrepreneurship efforts in Ireland. I look forward to seeing the impact of this initiative in helping to shape Ireland’s environment for start-ups in the coming year,” Dane Stangler, Vice President of Research and Policy, Kauffman Foundation.

Two thirds of all new jobs created in Ireland are generated by start-ups,  a pillar of enterprise that has already been identified by Government in the recent Enterprise Strategy 2025, as the key to economic recovery.

Damien English, Minister for skills, research and innovation says, “I am further encouraged by Ireland’s ability to become a global startup hub through the launch of GEN Ireland that has the potential to take a leadership role in advancing Ireland’s entrepreneurship ecosystem by drawing all of the elements of the ecosystem together and sharing expertise, knowledge and resources as a means of forging a stronger startup environment.”

Through GEN’S host of global initiatives, competitions, events and programmes  which it plans to roll out in 2016, as part of Ireland’s centenary year to mark the start of a movement engendering the entrepreneurial mindset of the new century, the initiative directly links start-ups in Ireland to all start up cultures and nations worldwide. Through its knowledge platform, research, policy and networking of Governments, it  will lead the way in advancing Ireland’s entrepreneurship culture and eco-system.  This is an opportunity for Ireland to position itself firmly as a the global hub for startups. Other global leaders and inspirers including Sir Richard Branson are among the supporters of one of the more prominent initiatives hosted by GEN Ireland, called Global Entrepreneurship Week Ireland, (GEW). Branson featured at the forefront of a global awareness campaign in 2014, that won GEN Ireland, ‘Best Global Entrepreneurship Awareness Campaign’ among 160 countries.  Building on this momentum, along with full ecosystem engagement and support, from Government, private sector business leaders, innovators, researchers, policy makers, educators and entrepreneurs, GEN Ireland is poised to mobilise the new movement of entrepreneurship in Ireland that will help pave way for a burst of nascent entrepreneurs to jump start the startup revolution.

According to chairman, Prof Frank Roche, “We are at an entrepreneurial juncture in Ireland where GEN Ireland can be the  catalyst for new thinking and approaches around collaboration, networking and engagement. We find ourselves as a central meeting point for all actors in the ecosystem, converging on this one open platform of engagement. This in itself is the simple magic and potential of GEN Ireland that can act as a spark and a means of harnessing, building and advancing a sustainable culture of entrepreneurship that is inclusive.”

GEN Ireland is part of GEN Global, and powered by the world renowned,  Ewing Marion Kauffman Foundation, in Kansas, USA that comprises of 160 countries, 25 thousand partnerships linking, engaging and connecting on one platform.