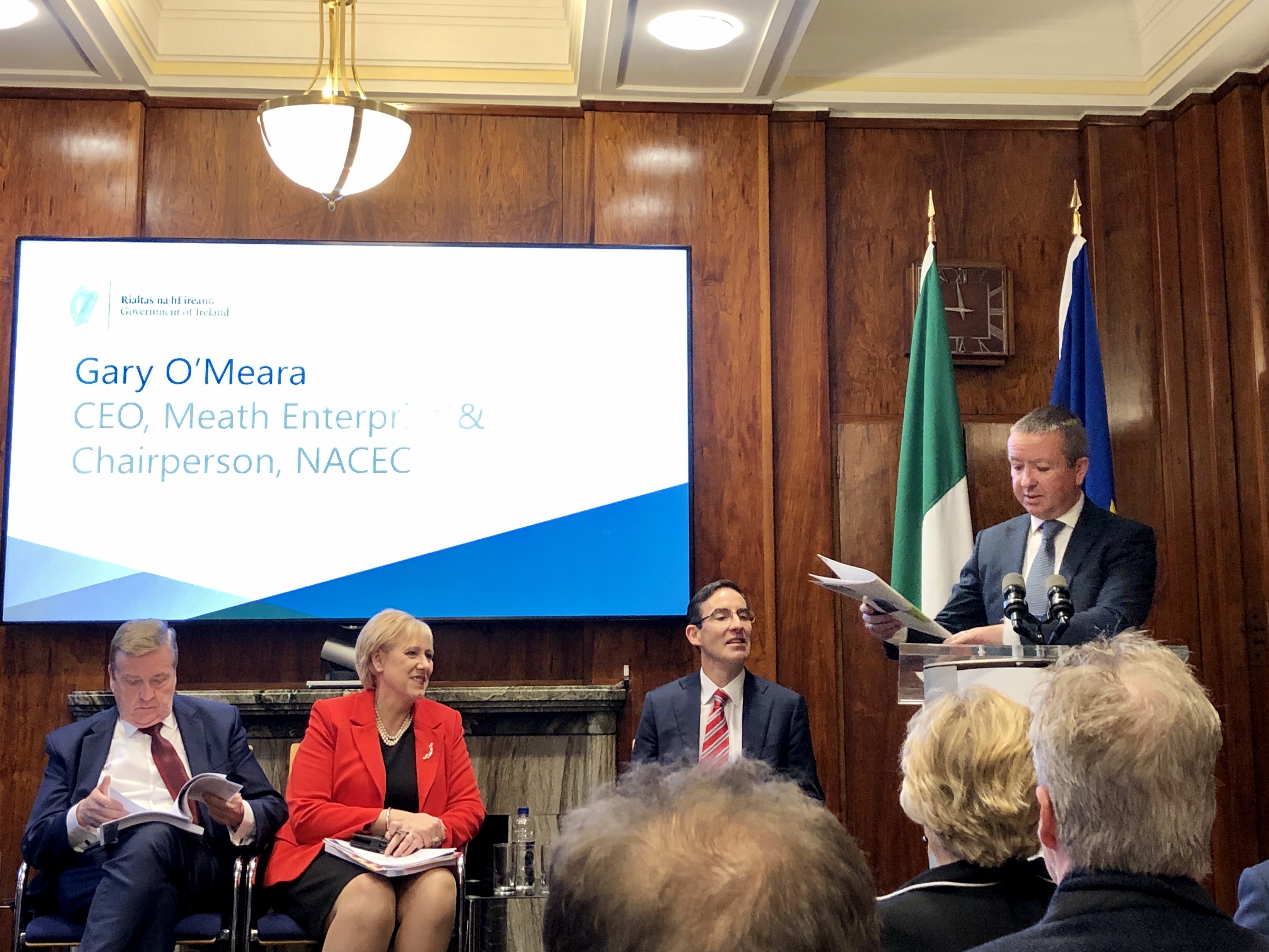 Gary O'Meara
News
Comments are off for this post

Meath Enterprise is one of the fastest-growing not-for-profit enterprise development companies in Ireland, the deputy secretary general of the OECD heard in Dublin last week.

With a number of major projects in the pipeline, the Meath-based development company was given the opportunity to outline its ambitious plans at the launch by Business, Enterprise & Innovation Minister Heather Humphreys of a major review of SME and entrepreneurship policy in Ireland, conducted by the OECD

Among the attendance was OECD Deputy Secretary General, Ulrik Vestergaard Knudsen. The OECD’s analysis of Irish SME productivity levels, resilience and potential for growth will form the basis for a new government strategy on SMEs and entrepreneurship to be published by the end of this year.

The CEO of Meath Enterprise, Gary O’Meara, told the launch of the OECD review that in addition to its two existing enterprise hubs in Navan and Kells, comprising a total of 110,000 square feet of incubation, coworking and enterprise support space, there are now plans to develop a third new enterprise and coworking hub in Dunshaughlin.

Other projects include rolling out the new Boyne Valley Food Hub project in Navan, with food incubation units, research and development labs and kitchens to support food and agtech start-ups, as well as the creation of a new 28,000sq ft digital innovation and smart agri hub, which is part of a European initiative to develop a connected network of such centres across the EU.

Another exciting development for the county will be the creation of a new food testing lab fully approved and accredited by the Chinese government’s CNCA agency to support local food producers distributing retail and nutritional products to China.

“The Boyne Valley Innovation District is a multi-regional cluster of high-tech global food companies who are working with us to develop start-up and SME scaling programmes, accelerators and routes to market to facilitate the expansion of indigenous Irish food and agtech companies who have the capability and ambition to take their business global,” said Mr O’Meara.

This cluster includes firms like Devenish Nutrition, which last year announced plans to develop a new €118m global innovation centre in the Boyne Valley, and Emeri Nutrition, a major Chinese food company which will soon be producing infant formula from a new world-class facility in Navan.

It also includes Epicom Foods, Meath Enterprise’s largest tenant which began as a two-person operation in the Navan Enterprise Centre back in 1998, and which now employs 335 people across multiple sites. “We want to support the accelerated development of more companies like Epicom,” added Mr O’Meara.

The Meath Enterprise Centre in Navan is today home to 30 different companies and organisations providing jobs for almost 250 people. “This community enterprise centre is an important part of the local and regional enterprise ecosystem and a key driver of other important cluster projects, such as the Boyne Valley Food Innovation District,” he went on.

The Kells Tech Hub supports a wide variety of tech-enabled start-ups and SMEs as well as remote and smart workers. Most enterprise events and business training are run in this centre, which boasts a 128-seat auditorium, video conferencing suite and meeting spaces, all supported by high-speed fibre broadband.

The resulting Global Startup Ecosystem Report ranked the Mid-East region as a global top 10 agtech activation ecosystem as well as a leading ecosystem for female entrepreneurs in tech, second only to Chicago in the United States.